Wild Raccoons On Your Minnesota Property 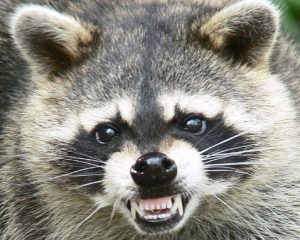 Raccoons are cute to look at in pictures and may be even to witness from a distance, but when you have a chance encounter with one in the middle of the night, it can be scary! Sometimes the noises that they create by toppling things over around your home can even make you think that someone is trying to break into your property! Know some of the facts about raccoons and know that the team of experts at Minnesota Wild Animal Management remain committed to the safe, effective, and humane removal of raccoons from your property.

When are raccoons more prevalent? In Minnesota, raccoons “hibernate” from the end of October through February. During the summer and into the fall, raccoons are busy at night, gathering up as much food as possible to put on fat to survive the winter months. They are known to lose as much as half of their weight by the onset of spring.

Raccoons are typically found in habitats associated with water: You guessed it… Minnesota: the land of 10,000 lakes… water covers much of the state, which means raccoons are found in just about every corner of the state. No area is exempt.

Healthy Raccoons Don’t Like To Be Around Pets Or Humans

You may have heard the saying that some creatures are more scared of you, than you are of it. This holds true for the healthy raccoon as well. They do not like encounters with people or pets either. Typically, when confronted, the healthy raccoon will retreat quickly. Unfortunately, raccoons are susceptible to disease and are largely known for carrying parasites.

Why Is A Raccoon Around MY House?

Raccoons have adapted well to humans and have become excellent scavengers of food in garbage cans, garbage dumps, campsites, trash piles, and have even been known to be attracted to pet food left outside overnight. Any of these attractors that are around your property could very well explain why you have had an encounter with a raccoon.

Raccoons can cause all types of problems including tipping over your trashcan, damaging the shingles on your rooftop, making a nest in your chimney, and damaging your garden or fishpond. When you encounter a raccoon on your property, stay away. It may have rabies. If provoked, it could attack. Call the experts at Minnesota Wild Animal Management at (612) 237-8282 to immediately remove the raccoon from your property safely and humanely.